Thank you to all our partners and sponsors for their support and contributions to our research activities.

Our current active research projects are:

The most common form of cancer for men and women are of the prostate and breast respectively. We are developing a new robotic system that may eventually help physicians locate and treat prostate and breast cancer without the cost of CT-scans / MRI or the radiation of X-rays. The system combines measurements from focused ultrasound beams and an array of electrode-needles to form a combined impedance tomography cross sectional image of the tissue. The robotic arm and linear stage position the needles and ultrasound probe such that multiple images can be taken which we can later stitch together to create a 3-D model of the prostate/breast and, ultimately, the whereabouts of a tumor.

Percutaneous nephrolithotomy (PCNL) is a surgical procedure used to treat urinary calculi for patients with large kidney stones. The procedure involves removing the stones via a small incision in the patient’s back, through which thin instruments are threaded in. Despite over 40 years of development, PCNL remains a challenging procedure to learn. Particularly in less experienced hands, it can lead to higher complication rates compared to other endoscopic procedures. We are developing a collaborative human-robot system for PCNL where human agents and robots work independently but in parallel towards a shared objective and improve kidney access during PCNL.

On average, 11 Canadian men die from prostate cancer every day. Ultrasound-guided needle biopsy is the gold standard for prostate cancer detection. However, it is well-recognized that ultrasound imaging lacks the resolution required to delineate prostate structures and abnormalities. In fact, physicians can target hypoechoic regions but it has been reported that up to 40% of prostate cancers are invisible under ultrasound. This inability to identify cancerous regions requires 10 to 12 tissue samples at various locations in the prostate without targeting suspicion lesions. It is estimated that more than one million biopsies are performed each year, out of which cancer detection on the first attempt is as low as 25% with up to 20% of men require three or more distinct biopsies session for diagnosis.
We have developed instrumented needles with micro electrodes that are able to measure the electric conductivity of the tissue. The needles supply low electric current to the tissue while the induced voltage is measured. With the current and voltage known, the local conductivity of the tissue is determined. Since malignant cells and healthy tissue exhibit different levels of conductivity, through further processing of spectral data it is then possible to evaluate the presence of cancer in real time. 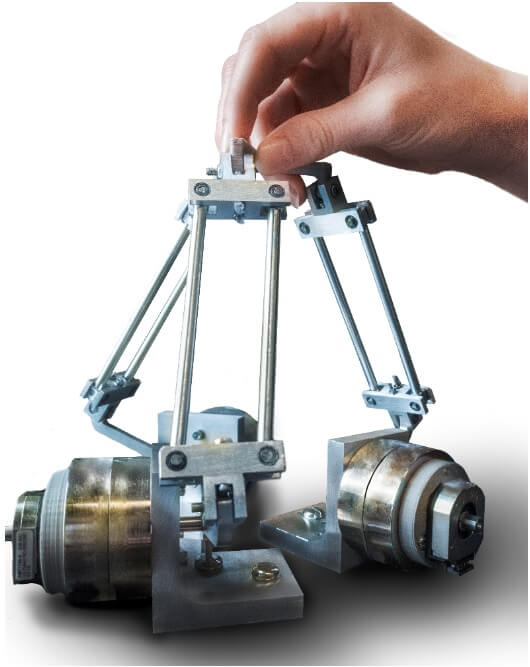 Robot-aided surgery has been experienced rapid adoption rates over the past years. A wide range of procedures are now performed by means of a teleoperated surgeon-robot interface. Some of these procedures were already being performed laparoscopically before robots were introduced and the robotic technology simply allowed surgeons to control the instruments remotely. A typical system consists of a teleoperated robotic arm that operates a surgical tool (slave) and a device from which the surgeon controls the slave (master). It makes it possible to refine, correct, and complement the operator motion while increasing accuracy and collecting performance data. The 3DOF haptic device on the left is a master manipulator that has been designed in the lab for such procedures.

Actuators for haptic feedback in robotic surgery and rehabilitation 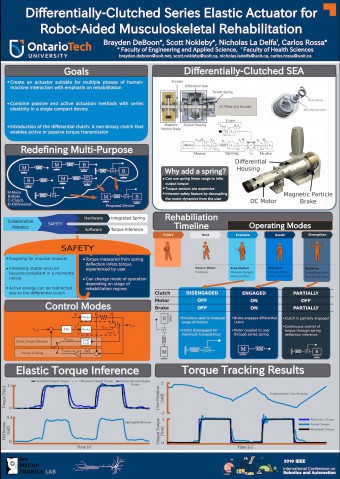 Musculoskeletal disorders (MSDs) are the leading cause of lost-time injury and worker compensation costs in Canada, placing a significant burden on individuals, workplaces, and the health care system. Telemedicine is a prominent vehicle to provide healthcare to patients at a distance and give access to medical services that would otherwise not be available in distant communities. However, the current MSD telemedicine practice is mostly within the audio-visual domain, which significantly limits the practice of occupational and physical therapy.
We are developing remotely-operated devices with the ability to translate the motion of a therapist at the patient’s home and enable MSD rehabilitation to be conducted through existing telemedicine networks across the country. The actuator on the left was developed as a means of bridging this gap by translating the therapists motion to the patient in a safe and effective manor. The goal is to provide meaningful assistance to people experiencing MSDs who are limited in either mobility or access to appropriate medical facilities. 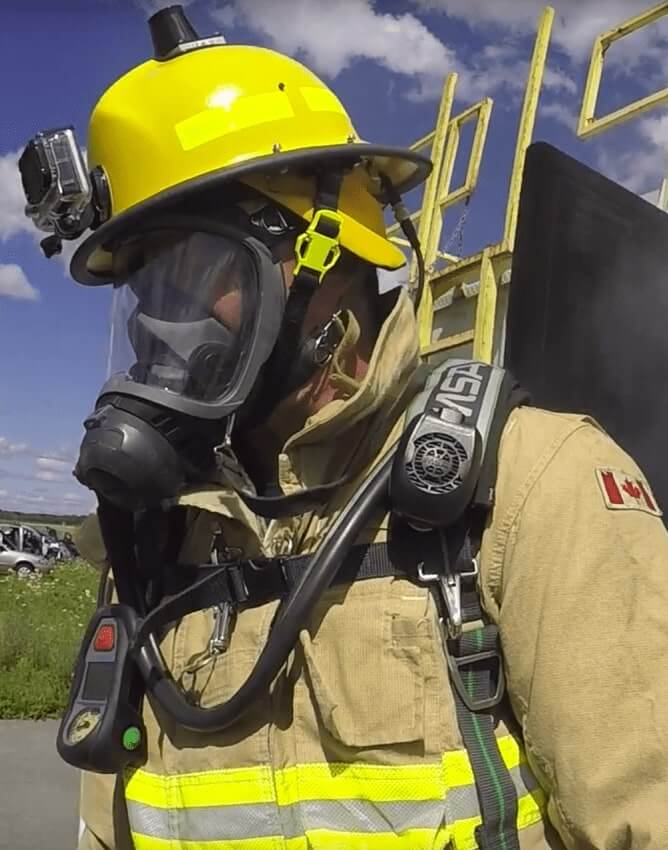 Structural firefighting is undoubtedly one of the most dangerous professions. At times, firefighters inside unknown structures can become disoriented due to heavy smoke and a potentially changing environment in the event of a ceiling or wall collapse. This is an extremely dangerous scenario and can be fatal if the firefighter is not able to find their way out or be rescued. In partnership with the City of Oshawa and Oshawa Fire Services, we have developed a smart helmet (shown on the left) that can build a dynamic map of the smoky environment as a firefighter enters a structure. The map, similar to a floorplan, is then used to localize the firefighters within the structure and send information about their location to an Incident Commander (IC). This allows the IC to know the exact location of each firefighter inside a structure at all times, even in previously unknown environments. In the event of a Firefighter mayday, since the exact location of the firefighter is now known, rescue measures can be optimized in order to bring that Firefighter back to safety as quickly as possible.

Our previous research projects are:

Traditionally, haptic interfaces use active actuators such as electric motors to generate force feedback. It is well-known that these interfaces can suffer from instability issues depending on the simulated environment. In several applications, instability is a particular concern as it represents a true danger to the user. Passive actuators such as brakes and dampers are intrinsically stable and safe. We demonstrated that small-scale magnetorheological (MR) fluid brakes combined with small DC motors can increase the performance and safety of force-feedback devices. The picture on the left shows the hybrid actuator we developed comprising two unidirectional MR brakes and a DC motor. The complete system can produce 7.9 times more torque than a volume-equivalent DC motor with lower inertial and frictional torques. The device has been patented and transferred to one of our industry partners in Europe.

One out of eight Canadian men will be diagnosed with prostate cancer during their lifetime. In Canada, prostate cancer accounts for roughly one-quarter of all cancer cases in men, making it the leading cause of cancer deaths with 24,000 diagnoses and 4,100 deaths every year. Brachytherapy is a popular treatment for men with early prostate cancer due to its high success rate, minimal side effects, and patient convenience. It involves the insertion of needles loaded with tiny radioactive seeds into the prostate. Once the needles are fully inserted, they are pulled back to permanently leave the seeds in locations inside the prostate, where the radiation released from them treats the cancer cells. The radioactive seeds must be implanted in target locations with great accuracy. However, current techniques only enable surgeons to place seeds to within 5 mm of an intended target.

The figure on the left shows the hand-held instrument we developed that helps surgeons place seeds with an accuracy of 0.33 mm. It steers the needle automatically by rotating its base as the surgeon inserts it. Delivering radiation with pinpoint accuracy will lead to better prostate cancer control and fewer side effects for patients. It can also allow treating prostate cancer situations that are not possible with the current imprecise technique. One example is treating only a part of the prostate for early prostate cancers. 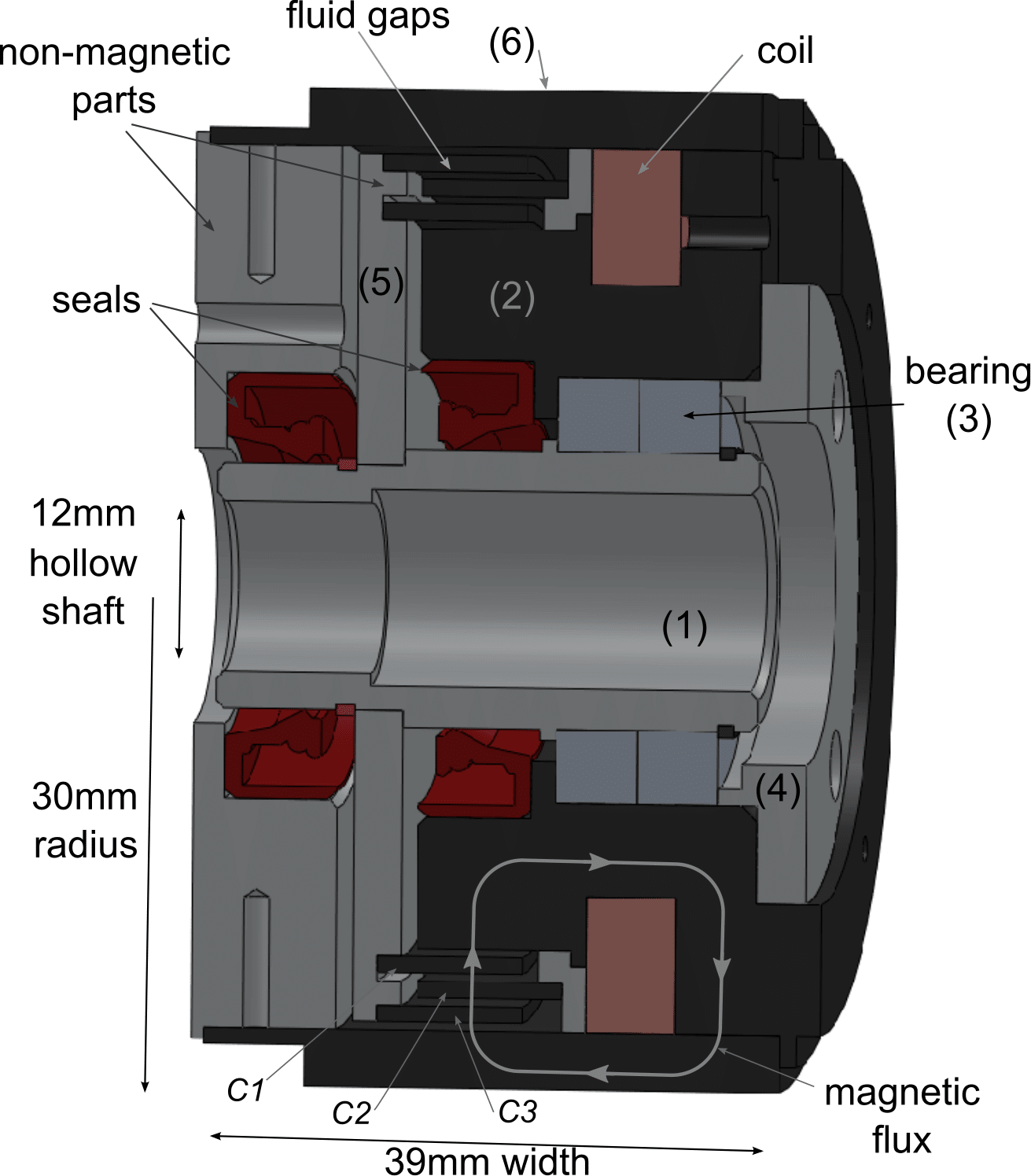 Magnetorheological (MR) fluids have emerged as a promising technology for new actuator design. An MR fluid is an active material composed of a suspension of soft ferromagnetic micron-sized particles (typically 1 to 10 microns) dispersed in a carrying liquid (mineral oils, synthetic oils or water). Under the action of an external magnetic field, these particles form chain-like structures or aggregates aligned roughly parallel to the magnetic field, changing the apparent viscosity of the fluid (see the animation on the left).
Classical approaches for designing MR brakes have not accounted for fluid nonlinearity and magnetic saturation while addressing tradeoffs in terms of repose time, off-state torque, power supply, desired torque and volume. We showed that performance is strongly dependent on electromechanical design and introduced a new model for optimal actuator design. This resulted in an actuator with 23% more torque in a volume 76% smaller than a commercially available MR brake (second figure).